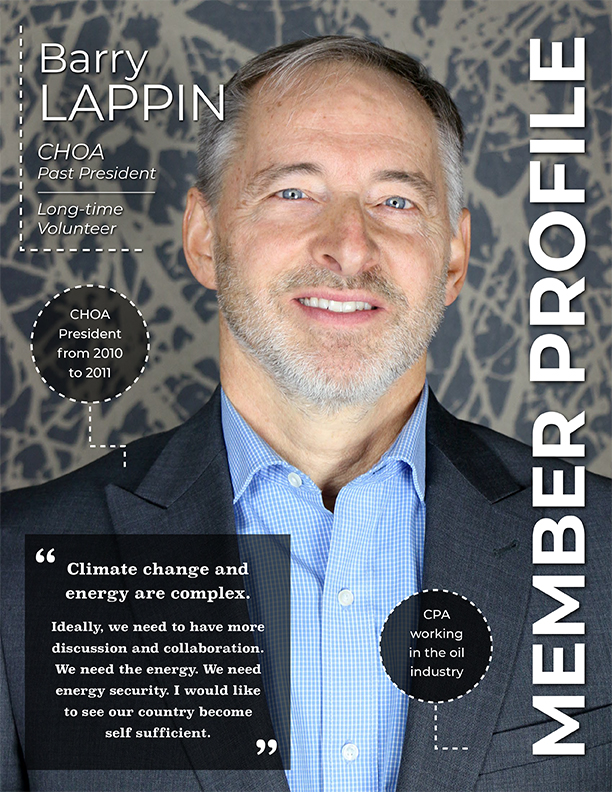 Barry Lappin is an interesting interview. He became a private pilot five years ago after his son decided to take his license. Barry, who had always wanted to fly – joined his son in ground school and now keeps his license current by taking his friends and family for tours through the mountains and over Lake Minnewanka.

Barry started his career as a Chartered Accountant with Deloitte after graduating with a Bachelor of Commerce from the University of Alberta. He then spent some working in both Canada and the UK.

One of his early projects with Deloitte was a contract with the government of Canada to do year end audits in Northern Canada. He would travel in a chartered King Air going from hamlet to hamlet, landing on gravel strips and taking inventory along the way.

In 1998, Barry left Deloitte and embarked on a career in the oil and gas sector, investing in a company that manufactured wellheads for heavy oil steam injection.

“I learned the hard way. I am not an engineer, but I work with engineers, so I learned by doing,” said Barry. “I handled jobs from the beginning – work orders, ordering materials, helping with the drawings – just to do everything from A to B to learn about the business.”

The investment was successful, and the company grew quickly along with the heavy oil industry working with operators including Imperial Oil, CNRL, Cenovus, ConocoPhillips, Husky, MEG Energy, Statoil, Total plus a number of international projects.

About that time, Barry also started to get involved in CHOA. A friend invited him to the Slugging It Out conference and he found it was one of the best places for networking.

He joined a technical subcommittee and then the board for eight years. He moved from Vice President, and then to President and saw some of the biggest changes within CHOA during his tenure from 2010-2011.

“It was a very busy time for the oil industry,” he said. “We had so many members and the organization was all volunteer based. There was too much on the go. So, we as a board went to a governance model and hired an executive director.”

Another one of his big focus areas was education as climate change and the environment were becoming important topics of conversation. Barry said the board engaged the public through education and events both locally and internationally.

“I was fortunate to travel quite a bit as President and Past President with the help of the Alberta government representing the Canadian heavy oil industry at a number of events and conferences mainly in Latin America. Canadian operators and service companies have a lot of experience and valuable technology to share internationally.”

And Barry also did a lot of promotion and education within Canada as well.

“I’ve been to most of the Canadian oilsands sites. The best part of the job is going on site,” he said and added how big the challenge is that is facing Canadians. “Climate change and energy are complex. Ideally, we need to have more discussion and collaboration. We need the energy. We need energy security. I would like to see our country to become self sufficient.”

Barry is still involved in CHOA in the drilling and completions technical subcommittee and he has seen the changes that have occurred in the industry since he first became involved.

“In those days it was all about drilling and growing production as quickly as possible. Today, we have to find a way to lower our costs and produce more efficiently,” he added. “A lot of the infrastructure is in place, the facilities are built, it’s a matter of how do we get our costs down now? That is the real challenge. Technology and innovation are key. We have to get our cap ex down, our op ex down and emissions down. If you manage to do all three of those things it will make the oil sands a lot more competitive with the rest of the world. We’ve come a long way. That’s why the industry is exciting. It’s changed so much.”

Barry is particularly interested in bitumen beyond combustion and some early work being done by Alberta Innovates.

“If we can find alternative uses beyond combustion that would be huge for our industry. That would be very exciting. Carbon fiber is one possibility but are there others?”