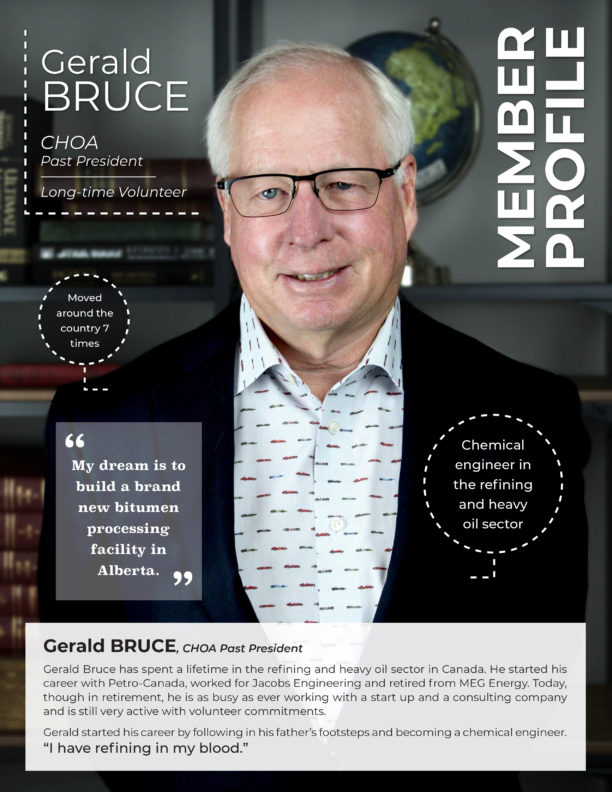 Gerald Bruce has spent a lifetime in the refining and heavy oil sector in Canada. He started his career with Petro-Canada, worked for Jacobs Engineering and retired from MEG Energy. Today, though in retirement, he is as busy as ever working with a start up and a consulting company and is still very active with volunteer commitments.

Gerald started his career by following in his father’s footsteps and becoming as a chemical engineer.

“I have refining in my blood,” he explains.

His father started the Texaco refinery in 1949 in Edmonton and was involved in shut down in 1984. Although Gerald grew up in Montreal (where his father was based), he completed his university degree in Waterloo, Ontario and then moved to Alberta to work on the Esso Cold Lake project as part of his work terms. He made Calgary his home and stayed “because the skiing was good, and the opportunities were good.”

With a strong background in refining, Gerald spent 23 years with Petro-Canada moving several times across the country as different opportunities came up, but he always returned to Calgary. Then he became a subject matter expert in a role with Jacobs Engineering focused on the oil sands and that translated into work with MEG Energy working on a partial upgrading technology .

Gerald retired in 2013 after 32 years in the oil and gas industry but chose to stay involved through different initiatives that include technology development and applications, heavy oil production and bitumen market accesses initiatives, including solidification.

“My passion is ensuing the industry in Alberta is relevant and we can position ourselves to be the supplier of bitumen for the world,” said Gerald. “My dream is to build a brand-new refinery in Alberta.”

And for that reason, his involvement in CHOA is a great fit.

Gerald started with CHOA in 2004 as a volunteer on a technical subcommittee and he became the CHOA Vice President, and then President. He is still very active with CHOA and sits on the Facilities and Upgrading Technical Subcommittee and manages the CHOA LinkedIn Group which has over 5800 members.

“CHOA is unique,” said Gerald. “You are able to have a cross section of the different people involved within different sectors of the industry from producing, moving, and processing oil to service support. It really helps to build an appreciation and understanding of the business.”

Although the industry is seeing some massive changes right now, Gerald believes the role CHOA plays is instrumental for future success.

“CHOA is knowledge, communication, education – helping people understand what the industry is all about. To be able to speak articulately and intelligently about the successes and how we are well positioned for the future.”