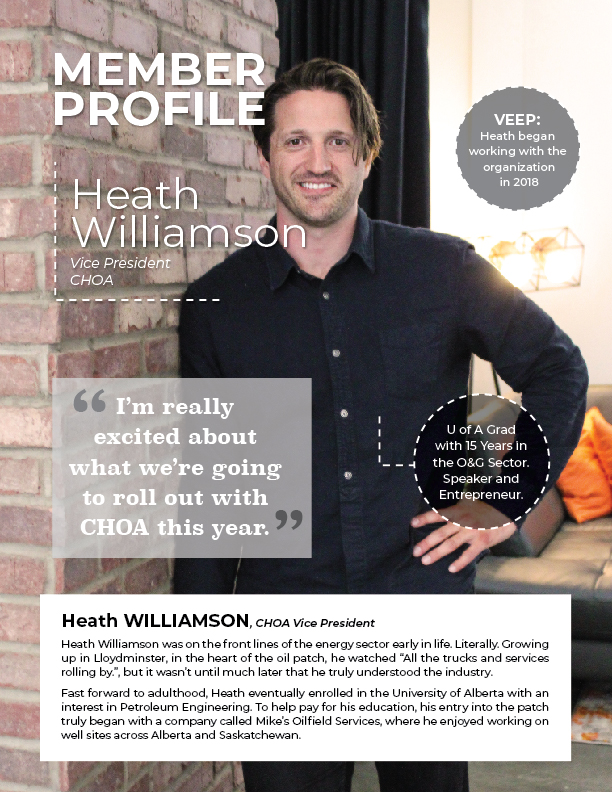 Heath Williamson was on the front lines of the energy sector early in life. Literally. Growing up in Lloydminster, in the heart of the oil patch, he watched “All the trucks and services rolling by.”, but it wasn’t until much later that he truly understood the industry.

Fast forward to adulthood, Heath eventually enrolled in the University of Alberta with an interest in Petroleum Engineering. To help pay for his education, his entry into the patch truly began with a company called Mike’s Oilfield Services, where he enjoyed working on well sites across Alberta and Saskatchewan.

Around 2005 Mike’s did a job for BlackRock Ventures, a start-up oil company, and at that moment Heath decided this was his next step. He also fully admits he proceeded to “Hound them with phone calls”. This dogged persistence lead to a job as an operator the following summer.

The company was soon bought out by Shell but maintained the existing set of employees.  In 2009, the former principals of BlackRock came together again to form BlackPearl Resources Inc. where Heath had been employed for over 10 years.

In the last quarter of 2018, BlackPearl merged with Lundin Group of Company’s International Petroleum Corp. “With top tier people and projects,” says Heath of IPC, “the combined company is well-positioned to achieve sustained growth over the next 5 years.” As Heath moves on to pursue personal ventures within his CutBlack Ventures Investment & Advisory Enterprise, he wishes his friends at IPC Canada “nothing but tremendous success.”

With a growing foundation of experience, Heath’s first exposure to CHOA came in 2010 from being encouraged to attend events like the Slugging it Out Conference (a co-branded event with SPE and CHOA) by his long time boss and friend, Chris Hogue.

His interest ignited; Heath was eventually asked to be a speaker at Slugging it Out by Doug Fisher of Pengrowth. From there, he joined the organizational committee for this event and then chaired it the following year. Now a familiar face at these events, Heath was approached by CHOA’s Board of Directors and offered a seat on their board in 2018.

As CHOA’s secretary in 2018, once he became comfortable with the board format, he looked to see how they could modernize, to “Ensure support from the future generation of energy demand solution providers”. As of May 2019, he became the Vice President of the Canadian Heavy Oil Association. And, despite the economic climate in the energy sector, CHOA has seen marked growth in their membership numbers this past year and a half.

Heath describes the CHOA Board as operational with every individual director taking on actionable duties. “We all chip in. We all lead major events. We hold each other accountable” says Heath.

Both of Heath’s parents were teachers, and that common thread is perhaps one of the reasons for the direction he would like to take the CHOA. “I’m really excited about what we’re going to roll out with the CHOA this year.” Says Heath. “We’re going to really focus on content delivery for our membership. We need to give them more digital content and reasons to visit our website where they can stay up-to-date with the community.”

“Any time we put on a technical event; we want to record it. We want to put it on our website.” Heath says. “Then we can offer this content to our members even if they’ve missed an event.”

They are also entertaining the possibility of creating an integrated digital app to assist them with content distribution and industry advocacy, dates for social events or conferences etc. “We’ll certainly need to find additional funds to make this dream a reality, and we’ll also be polling our members to see what exactly they’d like in terms of content and delivery.”

“Really,” he continues, “CHOA events facilitate a huge amount of collaboration, networking, and information sharing. I would love to see the CHOA fostering a digital Canadian Heavy Oil community around a hub of industry related content.  I believe if we could aggregate all of our content, we could get to a critical mass of member-users who will sustain the CHOA for years to come.”

Heath’s passion for working with CHOA obviously hasn’t diminished, and the future looks bright for CHOA’s membership as a result.