The Canadian Heavy Oil Association (CHOA) is a not-for-profit association, driven by volunteer members, to provide a community of energy professionals focused on heavy oil and oil sands projects and developments. CHOA is not a lobby group, and is proud of its membership of individuals. 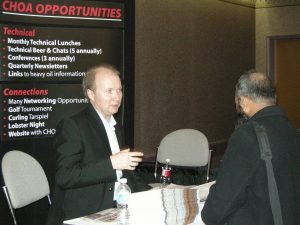 The industry has come to realize that collaboration is key to accelerating the development and implementation of new technologies. CHOA events give members an informal opportunity to share project updates and the outlook for new and leading edge technologies in the heavy oil and oil sands industry.

CHOA has an open membership and accepts individual members from all disciplines. Current members represent all aspects of the heavy oil business, including exploration, development, production, upgrading, transportation and marketing of heavy oil and oil sands. CHOA members can be found working for industry players, research organizations, regulatory groups and environmental specialists.

To become a member of the CHOA please go to our membership page.

Accelerate your career through knowledge and relationships in heavy oil.

The purpose of the CHOA is to strengthen Canada’s energy industry by providing our members and sponsors, and the general public, with technical, educational and social programs that accelerate and expand their knowledge, relationships and influence in our heavy oil community.

Building on the expertise of our members and volunteers, the breadth of our programs range from highly technical events to cross-disciplinary introductory sessions.

Add intelligence and clarity across our industry, and provide volunteers the opportunity to participate and lead exciting initiatives. The strength of the heavy oil community is the people that discover, innovate, produce, and support this critical energy resource. Our social events are built specifically to foster positive and dynamic connections.

The CHOA exists to strengthen Canada’s energy industry and accelerate the careers of our members.

We believe in building on the expertise of members, volunteers and sponsors in ways that expand their knowledge, relationships and influence within the heavy oil community and the general public.

Our technical, educational and social programs are designed to foster positive and dynamic connections, provide opportunities to participate in exciting heavy oil initiatives and bring intelligence and clarity to both our industry and the public.

Our organization trusts that the strength of the heavy oil community lies in the people that discover, innovate, produce, and support this critical energy resource.

History of the CHOA 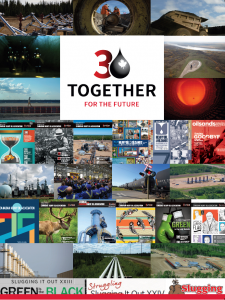 From its inception, the Canadian Heavy Oil Association has been about networking and connecting those working in the heavy oil industry.

The concept of the Canadian Heavy Oil Association was initially conceived in the mid-80s by a number of industry professionals who realized the need to create an informal forum for sharing ideas related to the heavy oil industry.

Different from other professional societies, the association would offer broad participation to heavy oil industry representatives including members of the service and regulatory sectors. Membership would also not be restricted to professional status as required by other traditional associations, such as the SPE, PS-CIM, and the CSPG. In addition, a strong social component would be added to provide an atmosphere to promote effective networking.

In 1986, the CHOA was incorporated through the Alberta Societies Act with its first president, Mr. Ken MacRae. As the membership expanded, the offerings of technical and social events grew. Membership fluctuated through the mid-90s with the turndown in the heavy oil industry due to oil prices. As a result of this slowdown, concerns were raised about the long-term viability of the Association. But with the return of strong pricing through the late 90s, membership and even participation dramatically increased, particularly as a result of the strong interest in Alberta oil sands development.