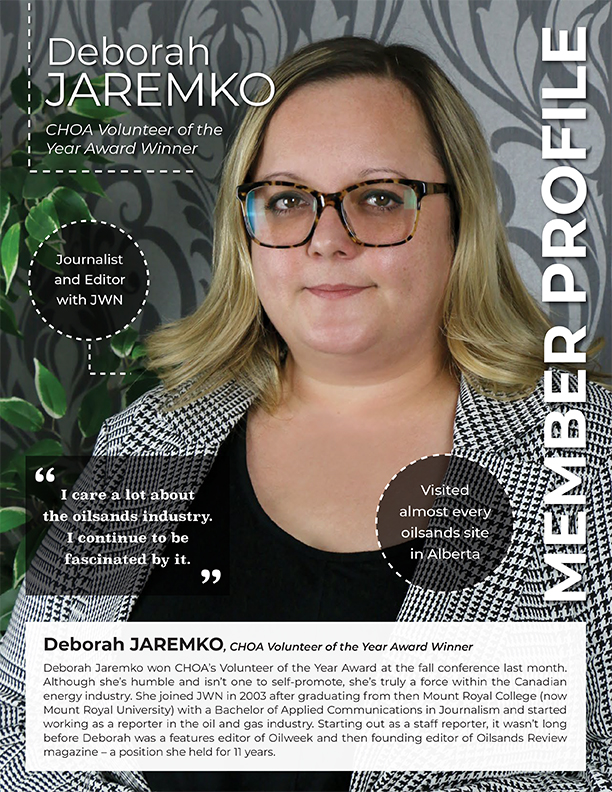 Deborah Jaremko won CHOA’s Volunteer of the Year Award at the fall conference last month. Although she’s humble and isn’t one to self-promote, she’s truly a force within the Canadian energy industry.

She joined JWN in 2003 after graduating from then Mount Royal College (now Mount Royal University) with a Bachelor of Applied Communications in Journalism and started working as a reporter in the oil and gas industry.

Starting out as a staff reporter, it wasn’t long before Deborah was a features editor of Oilweek and then founding editor of Oilsands Review magazine – a position she held for 11 years.

“I care a lot about the oilsands industry,” said Deborah. “I continue to be fascinated by it.”

Deborah said she has many career highlights, but what will always stand out was a tour of the Underground Test Facility (UTF) in 2005 with Devon.

The UTF was built in the 1980s by the Alberta Oil Sands Technology and Research Authority and worked to prove out gravity drainage theories based on the conceptualizations by SAGD inventor Dr. Roger Butler. The facility proved the viability of the SAGD concept, providing the foundation for massive growth in the oilsands sector after 2001 and more than 1 million bbls/d of commercial production today.

While she had organized the tour with Devon prior to reaching the site north of Fort McMurray, Deborah said she hadn’t quite realized they would be going into a mine shaft.

“I had no idea that morning that I was going to go to into the underground test facility and that’s where we ended up,” she said. “It was such a fantastic experience to be inside such an important site in terms of oilsands technology, innovation and determination. I’ve been to almost every oilsands site and each of them has been amazing but that one absolutely blew them all out of the water.”

Today Deborah is editor of jwnenergy.com and leads oilsands content for the Daily Oil Bulletin.

“It’s a much faster pace. Everyday starts and ends with jwnenergy.com whether I’m putting up the stories or getting the stories ready for the next day. It’s news!”

In additional to her role with JWN, Deborah has donated her time and expertise to CHOA. She’s been on the board of directors, was editor of the quarterly Journal for eight years and now sits on the CHOA Fall Conference planning committee.

She was also editor of the annual Heavy Oil and Oilsands Guidebook from 2006 to 2016, a partnership between JWN and CHOA that started with seed funding from the Government of Alberta.

“Everyone was so excited about the oilsands and there were so many projects. That’s what people wanted to read.”

In total Deborah has been involved with CHOA since 2008 selflessly lending her expertise and extensive knowledge.

It’s little wonder that she won the organization’s Volunteer of the Year award this year.

“It was very flattering. It’s great to be recognized and I feel quite personally involved in CHOA. It’s a great association. It has impact and brings results.”