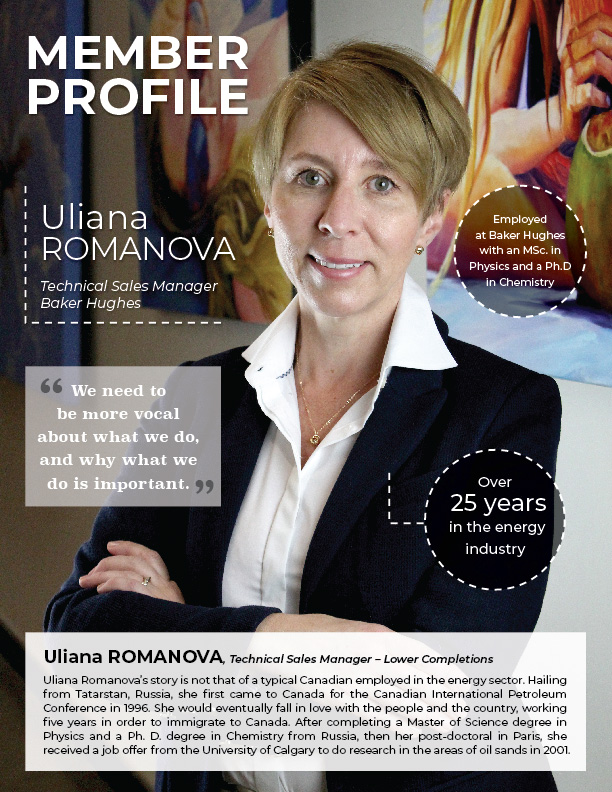 Uliana Romanova’s story is not that of a typical Canadian employed in the energy sector. Hailing from Tatarstan, Russia, she first came to Canada for the Canadian International Petroleum Conference in 1996. She would eventually fall in love with the people and the country, working five years in order to immigrate to Canada. After completing a Master of Science degree in Physics and a Ph. D. degree in Chemistry from Russia, then her post-doctoral in Paris, she received a job offer from the University of Calgary to do research in the areas of oil sands in 2001.

Prior to her current employer, Baker Hughes, a GE Company (BHGE) Uliana’s first job in the private sector was at Hycal Energy for about 10 years. Starting out as a project engineer completing special studies for operators in the oil sands, Uliana moved up and became a team lead in the engineering group, before working with sales as a technical advisor.

Uliana has also worked for a number of other companies, with over 25 years of work experience related to research and technology in heavy oil and oil sands with a focus on reservoir studies in areas such as formation damage and sand control.

CHOA and The Future

Prior to becoming an active member of CHOA, Uliana first served on the organizing committee of Slugging It Out. She also presented as a speaker on the subject of sand control for thermal production operations at CHOA Business Conference and Beer & Chat.

Uliana truly believes in sharing knowledge and experience is a key to strengthening the energy industry for both efficiency and developing the technology it uses.

“We’re not going anywhere because oil sands are a major resource.” She says. “We have to continue working on the technology. We really have to educate the public. We need to be more vocal about what we do, and why what we do is important. “

As someone who loves spending time hiking and, in the outdoors, Uliana Romanova believes in the environmental standards that the industry companies are working toward.

“We all love nature and we’ll all here…We want our children and grandchildren to have a good life.” And, like many of her industry peers, she would like to see a unified message among “All of us in the Canadian energy industry.”

It’s one that many believe we’re just not seeing. At least, not yet.