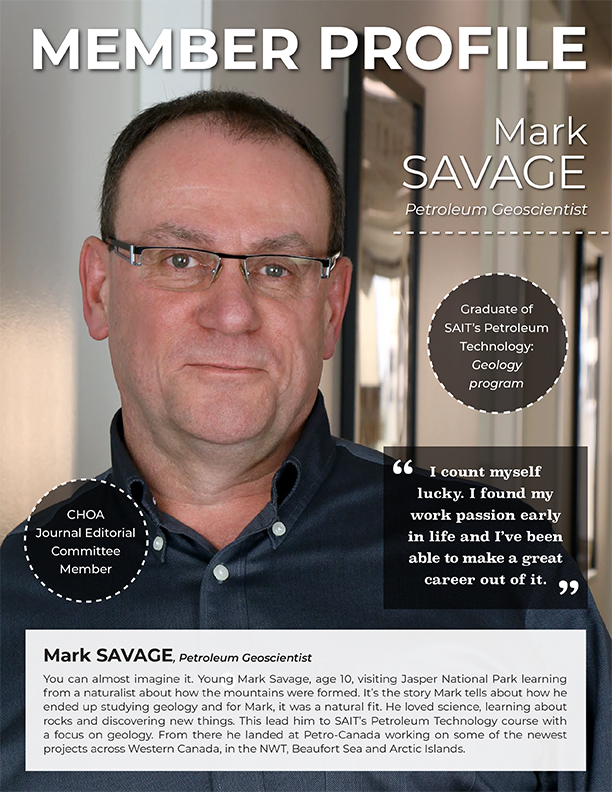 You can almost imagine it. Young Mark Savage, age 10, visiting Jasper National Park learning from a naturalist about how the mountains were formed. It’s the story Mark tells about how he ended up studying geology and for Mark, it was a natural fit.

He loved science, learning about rocks and discovering new things. This lead him to SAIT’s Petroleum Technology course with a focus on geology. From there he landed at Petro-Canada working on some of the newest projects across Western Canada, in the NWT, Beaufort Sea and Arctic Islands.

“I ended up in the heavy oil group in the early 90s,” said Mark. “I worked with a great group of people. Working in a team where everyone wants to make sure the project is successful; it makes you work that much harder and you get a better product in the end.”

In 2000, Mark transitioned into Petro-Canada’s Oil Sands group working on new teams and new projects including MacKay River and Fort Hills. During this period, he became an APEGA P.L. accredited geoscientist.

Then Mark’s biggest career opportunity came when he left the Petro-Canada and moved to a new business, Ivanhoe Energy, in 2008. As employee #2 in Calgary, he enjoyed all the changes that a start-up brings.

“As far as a professional development opportunity, it was the best move that I made,” said Mark. “For my career, every time I moved within a company or to a new company it was because there were new challenges and new opportunities to develop myself – to learn what I could do and what I was capable of.”

Mark worked on the very early beginnings of the Tamarack in-situ thermal SAGD project for Ivanhoe and then was recruited by Statoil to take on the Leismer project.

After a very successful five years with Statoil, the company was unfortunately impacted by the oil and gas downturn and in Nov 2015 Mark was laid off and by end of 2016 Statoil had sold their assets in the Leismer project.

“Everything was so bad in the industry, then it got worse,” said Mark. “I was laid off for 14 months. I did a lot of self reflection. As I was looking for a job, I knew I wanted to go back to what I really enjoyed.”

Fortuitously for Mark, Athabasca Oil Corp purchased the Leismer assets and through his connections and his previous experience with Leismer, he was a top choice to work on the project.

“This is definitely a plug for networking,” said Mark. “Through the course of my networking, I got the role.”

Around this time, Mark also started to get more involved with CHOA. A long-time member, he decided to take a stab at writing for the CHOA Journal. He’s written two articles and now is an Editorial Committee Member as well. He is a big believer in the value that CHOA brings to the industry and wants to contribute to seeing the industry be strong again.

Mark knows how hard the last few years has been on everyone. He was affected by another round of significant layoffs in Dec 2018 but he’s not letting that dampen his spirits.

“I am not willing to give up. I know I can contribute. I know I can bring value to a team, organization and to a project. It is just about finding the right opportunity.”

Talking to Mark, it is clear he loves what he does.

“I count myself lucky in that I found my work passion early in life and I’ve been able to make a great career out of it.”